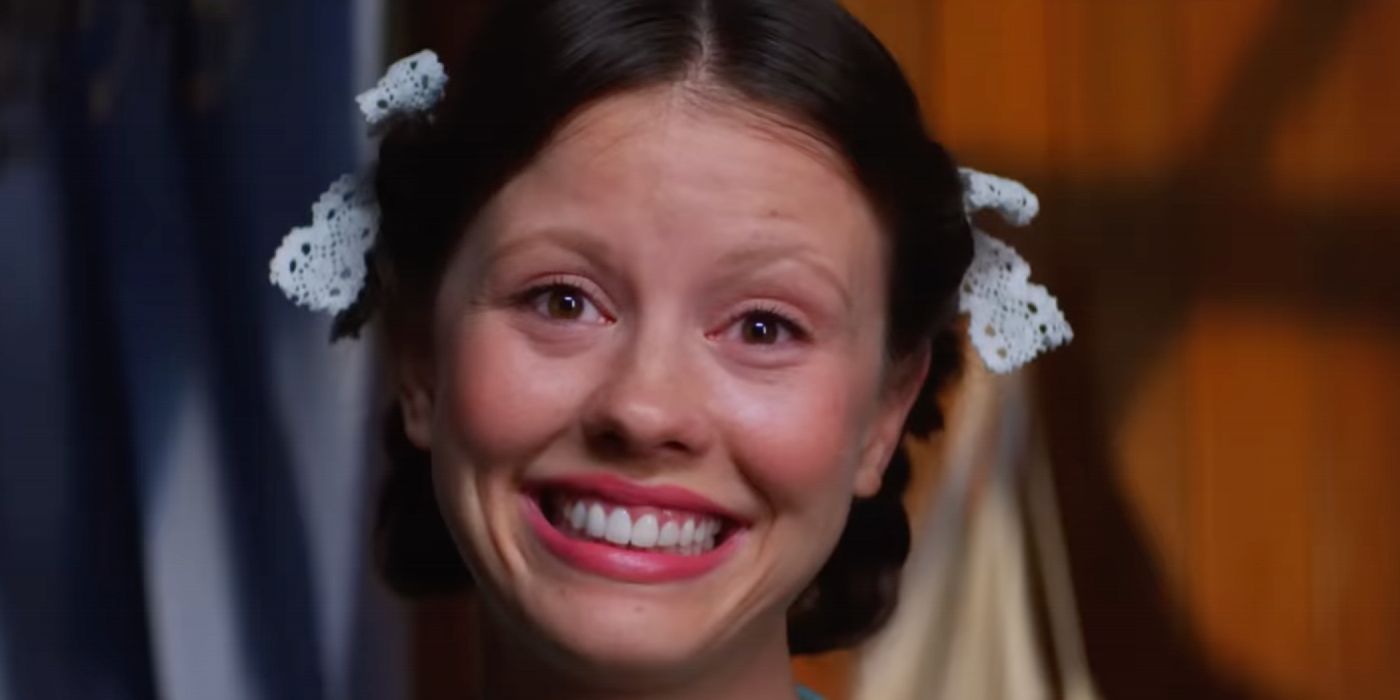 A24’s newest horror film, Pearl, delivers a self-contained and frightening exploration of an unsettling girl’s dreams of stardom and the gruesome violence that erupts in her wake. Anchored by a mesmerizing lead performance by Mia Goth, Pearl is a well-constructed ode to classic cinema and a creepy horror film all rolled into one, as if Dorothy Gale from Wizard of Oz had decided to take cues from American Psycho.

Nominally a prequel to Ti West’s other 2022 film, the slasher-flick love letter X, Pearl takes place largely in 1918, against the backdrop of World War I. Pearl (Mia Goth) is the vicious and elderly villain of X, but here is presented as a small-town girl living a quiet life on her family farm. She’s spent the years under the domineering care of her mother Ruth (Tandi Wright) and taking care of her sickly father (Matthew Sunderland) while her husband Howard (Alistair Sewell) is a soldier in the war. Pearl has dreams of stardom, however, and appearing on the big screen — a passion only spurred on by her supportive sister-in-law Mitzy (Emma Jenkins-Purro) and the charming Projectionist (David Corenswet) at the local theater.

On paper, it could all seems like a throwback to a classical era of filmmaking, full of reference to dreams of stardom in the early film industry. West and Cinematographer Eliot Rockett paint a deeply colorful and lush vision of a small town, recalling some of the bigger moments of technicolor majesty from films of that era. All of this is complicated by a darker edge to Pearl that compels her to kill animals and lash out at those who anger her. As her rage against her family and her world increases, she only becomes more unstable — eventually turning her anger against the people in her life in sudden and brutal ways.

There’s a pitch-perfect, unnerving quality to Pearl, an odd feeling that the audience always knows something is about to happen but fears what it’ll be. Goth, who’d previously played the older Pearl in X with the use of prosthetics, does amazing work in the film, imbuing Pearl with a wonderfully tragic mix of inner loathing, polite excitement, and simple brutality. Having co-written Pearl with West and filmed it alongside the previous movie, Goth finds an almost sympathetic edge to this girl with big dreams and bigger ambitions, making her moments of violence and anger land all the harder. Pearl is someone audiences should be rooting for, but even those who haven’t seen X can tell there’s something off about the young woman and the way she interacts with the world, all building to a vicious series of sudden murders that never cease to shock.

It’s an incredible performance by Goth, and in a world where horror films were more recognized in award season, would make her a front-runner for accolades. The rest of the cast also does solid work opposite her, with special mention going to Wright, who delivers a perfect German affectation to Ruth that hints at the additional layers hidden in the character. The interplay between Goth and Wright calls to mind any number of mother/daughter arguments from over the years, but West’s direction and the cast’s performances lend it a grim edge that escalates the film.

At its heart, Pearl is a melodrama, the kind of story that propels films like A Star is Born but focused on the frightening figures who don’t make it to stardom. It’s a self-contained character piece, and while it doesn’t delve into Pearl as fully as it could, it does a great job of illustrating who this girl is, why people would like her, and why they should be afraid of her. Pearl continues A24’s solid streak of horror films across 2022 and should only escalate the excitement for the upcoming MaXXXine, which will conclude the trilogy. Even for those who haven’t seen X, Pearl serves as a perfectly unsettling stand-alone film, a deep dive into a character that audiences wouldn’t expect to be so horrifying — or so memorable.

Catch Pearl in theaters on Sept. 16.

Michelle Yeoh in the multiverse of madness