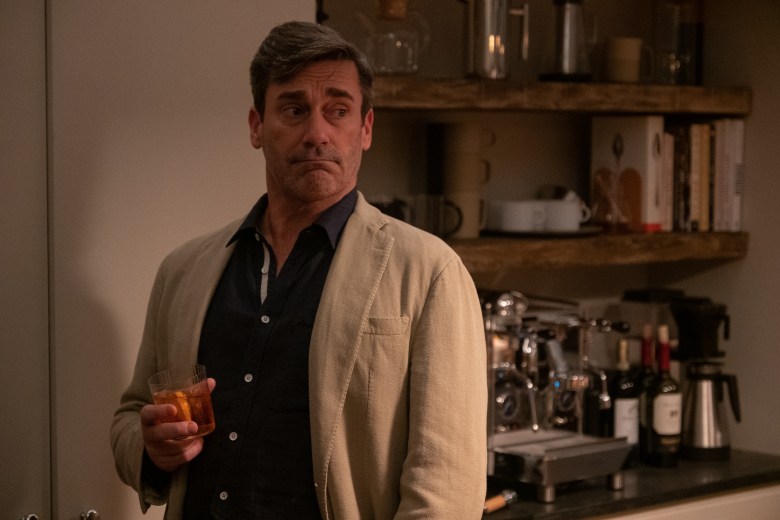 Don Draper may have been the role of a lifetime, but Irwin Fletcher is the role Jon Hamm was born to play. Equal parts goofy, charismatic, boozy, and clever, Hamm is firmly in his element in Greg Mottola’s entertaining art heist romp “Confess, Fletch” (Fletch being our hapless hero’s preferred moniker). Swashbuckling through the fast-paced action like a clumsy James Bond (with far less combat training), he finds himself at the center of a high-stakes art theft with a family fortune at stake. Surrounded by an eccentric ensemble of fabulously suspicious characters played by a deep bench of fantastic comedic actors, Hamm heads up a bona fide charmer that serves up the intrigue of “Knives Out” as a full-blown comedy. It doesn’t break the mold, but it’s an unmitigated delight.

The movie is based on the “Fletch” novels by Gregory McDonald, a popular mystery series published between 1974 and 1994. The character, an ex-marine turned journalist who stumbles into PI work, was first dramatized onscreen by Chevy Chase in the box-office hits “Fletch” (1985) and “Fletch Lives” (1989). Hamm fans are well aware of the actor’s versatility, and while his take on the laid-back lothario is less flat-out comedic than Chase’s, he is well-endowed with straight man charms. Hamm’s dramatic chops add a touch of intrigue to the character, and he keeps the audience guessing his loyalties as he plays all sides.

Combining storylines from a few different books, “Confess, Fletch” opens with Fletch wasting no time bedding a new client, fiery Italian Angela (Lorenza Izzo), who has hired him to find her father’s stolen paintings, including a rare Picasso. He is soon on a plane to Boston, known for its high-end art dealers (and tax incentives for film productions). Arriving in the apartment Angela has arranged for him through a friend, he is surprised — though not alarmed — to find a woman’s dead body among the impeccable decor. Knowing he will be a prime suspect, he sets about aiding the detectives in solving the case. Much to the chagrin of slow-moving Monroe (Roy Wood Jr.) and eager rookie Griz (Ayden Mayeri), an odd couple who are alternately flustered and stymied by Fletch’s insertion into the investigation.

With a short fuse and a newborn baby at home, Monroe lets Griz handle most of the staking out, and the novice spends most of the movie on various wild goose chases. She follows Fletch to the meticulous townhome of art dealer Ronald Horan (Kyle MacLachlan), a fussy germaphobe who’s the key to buying back the stolen paintings. The stakes escalate when Angela’s father is kidnapped, with the missing paintings demanded as ransom.

Apparently short on cash, Fletch is still staying at the crime scene, and trying to track down the home’s owner Owen (John Behlmann), in hopes that the cops will shift their suspicions onto him. His search leads him to wacky neighbor Eve (Annie Mumolo), an absent-minded stoner who’s full of silly anachronisms and is prone to starting house fires. A natural scene-stealer, the “Bridesmaids” scribe and “Barb and Star” actress elicits some of the film’s most slapstick laughs, exemplifying the movie’s parody roots when she asks, in all seriousness: “What is this, Woodburn and Bernstein?”

“Knives Out” isn’t the only influence on display, and thankfully writer/director Mottola isn’t shy about airing them. A dash of Bond and “All The President’s Men,” with “Ocean’s 11” and “Austin Powers” thrown in, “Confess, Fletch” is a veritable grab bag of Hollywood’s most satisfying investigations and silliest action spoofs. That it somehow all comes together in the end without feeling jumbled is a testament to Mottola’s (along with co-writer Zev Borrow) love of old school entertainment and keen sense of comedy. As he did with “Superbad” and “Adventureland,” Mottola has an innate sense of what gives even the silliest comedies staying power.

There are many inspired performances supporting Hamm’s hamminess; Marcia Gay Harden as Angela’s heavily accented stepmother gives Hamm a run for his money in more ways than one. Her seduction of Fletch, as she both doggedly pursues him and seems entirely unbothered by his rejections, is a delight to behold. MacLachlan is just shy of total caricature as the persnickety art dealer, and has the gravitas to sell his pivotal turn. Wood Jr., long a fixture in the stand-up world and on “The Daily Show With Trevor Noah,” makes a confident showing as the beleaguered cop and new dad. Though it’s the only extraneous role, fans will enjoy seeing Hamm reunite with “Mad Men” co-star John Slattery, who fumes as a cranky newspaper editor.

The threads of the story all come together wildly enough, with only a few minor plot holes to scratch heads. (It’s hard to believe Fletch would be allowed to sleep at an active crime scene, no matter who he’s sleeping with.) Though the original novels were written in the ’70s and ’80s, at times “Confess, Fletch” feels like a ’50s farce, with good old-fashioned misdirection and mistaken identities doing the leg work. Unlike James Bond, Fletch doesn’t need gadgets or fast cars to untangle this mystery, just a few Negronis and heaps of charisma. The formula works.