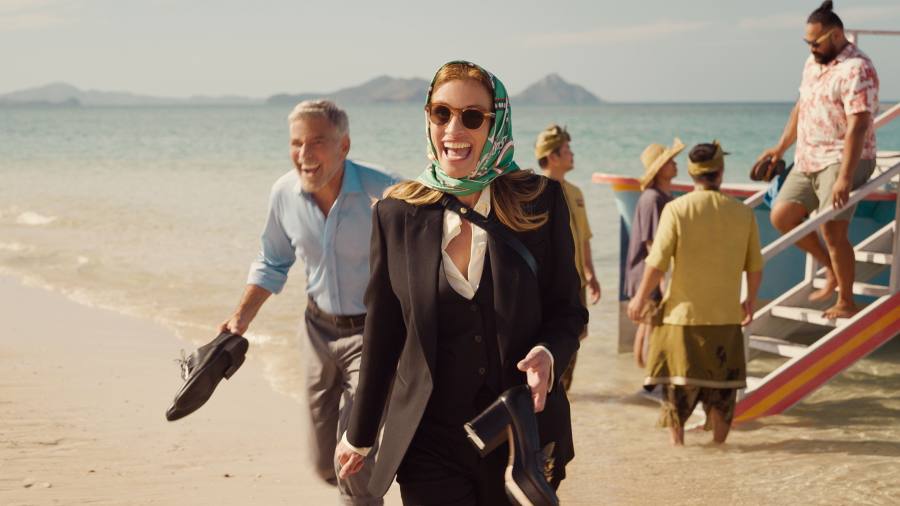 After the happy ever after comes Ticket to Paradise, a sugary screwball served with a thick wedge of nostalgia. The director is Ol Parker, but more relevant still is producer Working Title, the veteran British romcom makers who once defined the genre — not least via the much-loved Notting Hill. Now one star of that movie, Julia Roberts, reunites with the company if not fictional beau Hugh Grant. Instead, her opposite number is George Clooney, the pair cast in a story crafted like a sequel to an imagined smash from the 1990s.

The twist is the starting point. Roberts’s busy art dealer and Clooney’s bullish architect enjoyed their picture-book moment a quarter century ago — one followed by a bitter split. Their names are Georgia and David, but let’s be real here, they are Julia and George, two megastar personas making a comic show of bickering when their characters are thrown back together. The pretext is another passion: a holidaying daughter Lily (Kaitlyn Dever) gone head over heels in Bali for gallant local seaweed farmer, Gede (Maxime Bouttier).

The movie is uncertain of how much it wants to make fun of the job. As it is, we learn more about monofilament lines and flash freezing than we might in other romcoms, with wisdom dispensed too about the harmonies of the ocean. “I am so out of balance,” Lily sighs. An engagement follows, pending married life amid the spa-treatment visuals. And so for artfully fuzzy reasons — er, something about their own middle-aged fear of commitment? — her estranged parents rejoin forces to crush love’s young dream, and return Lily to America.

While the headliners play wrecking balls, the film would crumble without them, built as it is on a deeply rickety script. Georgia’s new romance with a square-jawed pilot sees the same joke about upgrades made twice in the same flight; Gede and his family are set dressing; key lines are borrowed from the great 2004 movie Before Sunset, which just makes you want to re-watch that instead.

And yet there are Roberts and Clooney, doing the robot to Run DMC during a drunken Bali night out, and the sheer dazzle of star power and perfect teeth almost makes it OK. Of course, the love the movie really celebrates is the one that cinema-goers once reliably felt for big names of their ilk, as well as slick, mid-budget crowdpleasers such as Ticket to Paradise — a movie down on one knee, earnestly asking for another chance.