The Daniels take us on a freewheeling adventure where metaphysics and martial arts don’t exactly make for the strangest bedfellows. A still from Everything Everywhere All at Once

Everything Everywhere All at Once has about enough circle symbolism to pull the conspiracy theorist into a spiral. The shape makes its first appearance in the opening shot. The camera zooms in on a circular mirror reflecting the happy faces of the Wang family — wife Evelyn (Michelle Yeoh), husband Waymond (Ke Huy Quan) and daughter Joy (Stephanie Hsu) — enjoying karaoke. When we are pulled through to the other side of the looking glass, we are confronted with a harsher reality of a family and their laundromat business nearing their breaking points. The portholes and spin cycles of the washing machines symbolise lives stuck in an endless routine. “Another year, pretending we know what we’re doing, but really we’re just going around in circles,” bemoans Evelyn.

Life seems to be imploding from all sides for Evelyn: the family business is being audited by IRS agent Dierdre (Jamie Lee Curtis), who readily highlights any invoice errors with — you guessed it — a circle; her husband is about to serve her divorce papers; her disapproving father Gong Gong (James Hong) is flying in for Chinese New Year celebrations; so, she insists her daughter not introduce her girlfriend at the party, further straining their relationship. If all this weren’t bad enough, she must also deal with a cosmic bagel collapsing in on itself and threatening to swallow the multiverse whole. The multiverse has proven to be a goldmine for storytelling in recent years. But no (live-action) movie so far has mobilised the carnival mirror delirium of the concept as enterprisingly as Everything Everywhere. Director duo Daniel Kwan and Daniel Scheinert, collectively known as “Daniels”, take us on a freewheeling adventure where metaphysics and martial arts don’t exactly make for the strangest bedfellows. Because there are things far stranger here as the fabric of space-time pretzels before it bagels. Keeping with the food theme, humans have hot dogs for fingers and play piano with their legs in one reality. A raccoon version of Ratatouille plays out in another. “The less sense it makes, the better” acts as a guiding principle throughout. Evelyn is confronted by two men with butt-plug trophies and cornered by a super-villainous entropic force armed with dildo nunchucks. Potty humour was a pervasive element even in the Daniels’ feature-length fart joke Swiss Army Man, where a suicidal Paul Dano treks through the woods with the gassy corpse of Daniel Radcliffe. Lowbrow silly collides with middlebrow sincerity here as well. Along the way, the film tells us a story about the generational disconnect between immigrant parents and their children, about the struggle for queer acceptance, about untapped potential and unfulfilled dreams, and about the inevitability of death, taxes and laundry. If the Daniels’ debut was called Swiss Army Man, this could very well have been called “Swiss Army Movie.”

Guided by the exposition of an alternate version of her husband from the so-called “Alphaverse”, Evelyn hops from one universe to another. Each games out different what ifs, choices which lead to different personalities and professions: a scientist, a movie star, a singer and a chef. How effortlessly Yeoh oscillates between the frustration of a long-suffering everywoman and the fearlessness of a kung fu master testifies to her wattage as a performer. It is pure movie magic. Evelyn learns every other alter-ego enjoys more accomplished lives than her because she got the shortest end of the stick. As Alpha Waymond puts it, “You’re living your worst you.” From the movie’s perspective, all this means is she is yet to tap into her latent potential. No better time to do it than when the fate of the multiverse hangs in the balance. 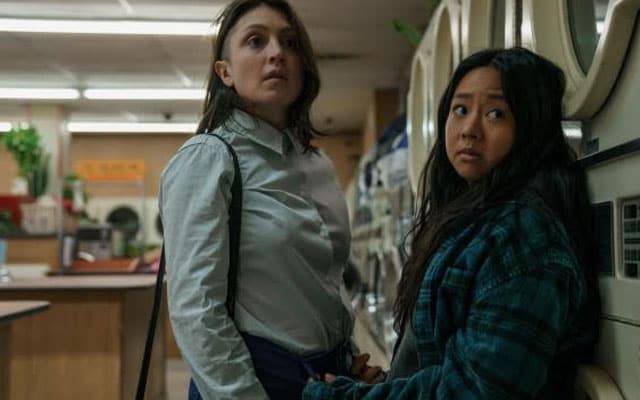 Everything Everywhere goes to unexpected places few have dared to go this side of Rick and Morty. In one reality, Evelyn and Joy are sentient rocks who sort out their differences via on-screen text in silence and without coming to blows. In the reality where Evelyn becomes a movie star, we learn she stayed back in China instead of moving to the US with Waymond. A tender reunion of star-crossed lovers plays out in a Hong Kong alleyway, recalling a similar scene from Wong Kar-wai’s “In the Mood For Love”. Montages of “verse jumping” give the movie hyperactive bursts of energy and send our brains into sensory overdrive, much like fast-scrolling through social media feed. Beyond the visual flair, the movie also excels in its authentic portrayal of the immigrant experience: the sometimes strained dynamic between those who leave and those who stay back, the gap between the first and second generations, the financial struggles, and the language switching.

Where some degree of myopia seeps in is when the movie introduces kindness as a deux ex machina. The super-villainous entropic force, known as Jobu Tupaki, turns out to be a version of Joy so consumed by nihilism and numbed by the weight of her pain she doesn’t see the point in existing. An earnest plea for kindness paves the way for an all-too-legible resolution. Evelyn strikes a fighting stance which morphs into a bid for a hug. Jobu Tupaki and all her followers are disarmed by acts or words of kindness. There is no denying that kindness is a superpower unlike any other, whether bestowed upon others or ourselves. But the more didactic ways the movie finds to make this point, the more it starts to feel like a Ted Talk.

Moreover, it doesn’t track with the movie’s own treatment of all the lives lost over the course of Joy’s nihilistic mission. This is similar to Scarlet Witch claiming her being a grieving mother somehow justified all the death and destruction she caused in Doctor Strange in the Multiverse of Madness. Both are cop-out endings which expedite a change of heart rather than reckon with the pain.

No matter how each viewer may respond to the movie’s ending, they will find it hard to fault its message to be kind and get along. Compared to the Marvel movie earlier this year, the Daniels at least find a method in their multiverse of madness. Things, as you might expect, come full circle. If the “everything bagel” is a black circle with a white void, its inverse “googly eyes” is a white circle with a smaller black circle. Together, they evoke the cosmic harmony of yin and yang. Even in a universe (or multiverse) of despair and chaos, the movie says we can still find hope and love.

Everything Everywhere All at Once releases on 16 September in theatres across India.

Moonage Daydream movie review: it may be all about Bowie but this trip lacks zip