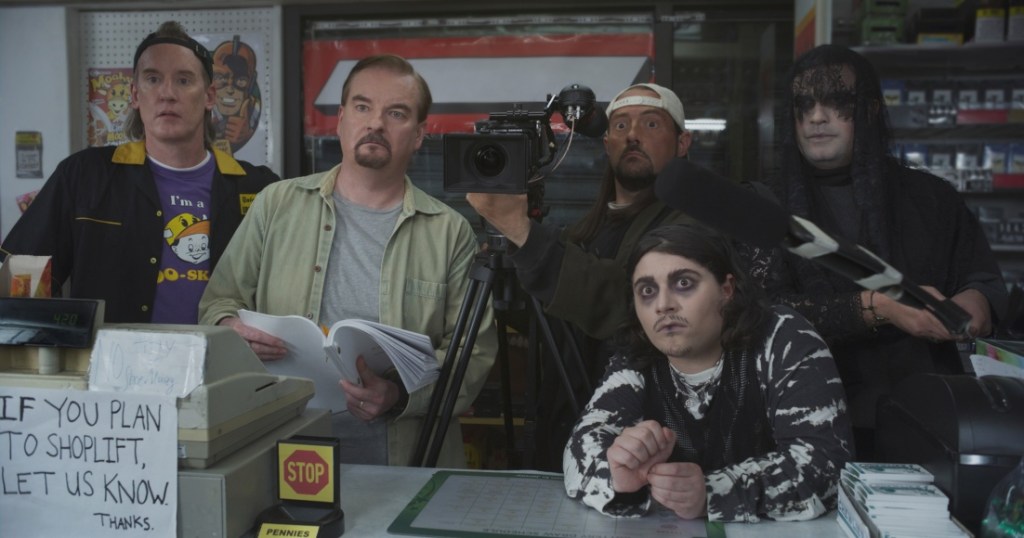 Are you a fan of filmmaker Kevin Smith who felt 2019’s “Jay and Silent Bob Reboot” wasn’t quite self-referential enough?

Smith has followed that repeatedly wink-wink adventure surrounding the R2-D2 and C-3PO of his View Askewniverse — Jason Mewes’ loudmouth stoner Jay and his mostly silent sidekick, Smith’s Silent Bob — with the second sequel to the film that started it all, 1994’s “Clerks.”

When “Clerks,” loaded with New Jersey attitude, hit, it was a breath of fresh if also foul-mouthed air.

“Clerks III” — the ninth View Askewniverse joint Sunday — is a mostly stale, exhaustingly meta affair with convenience-store clerks Dante (Brian O’Halloran) and Randal (Jeff Anderson) back at the center of the action.

And, of course, Jay and Silent Bob are right next door, legally selling marijuana from what formerly was the video-rental joint where Randal worked. The fact that their business is legitimate doesn’t stop the pair from executing an elaborately secret sale to a customer out in front of the store.

Silent Bob (Kevin Smith, left) and Jay (Jason Mewes) chill outside their store in a scene from “Clerks III.” (Courtesy of Lionsgate)

While Randal is arguing with at-the-moment Christianity- and cryptocurrency-obsessed store employee Elias (Trevor Fehrman, returning from “Clerks II”) — after Elias calls on Jesus to smite the heretic — Randal suffers a heart attack. Dante calls an ambulance, and Randal is rushed to the hospital.

Back at the store, a depressed Randal is self-reflective with his best friend and constant verbal sparring partner.

“You saved my life, man,” he tells Dante. “I just wish I had a life worth (expletive) saving.”

He decides the one thing he’s equipped to do, thanks to years spent watching movies at the video store, is to make a movie. After all, Quentin Tarantino had a similar background — although Randal allows that what he makes probably won’t be in the class of one of Tarantino’s works. It’s big of him.

And so we have the roadmap for Smith’s walk down memory lane, Randal penning a script chock full of his misadventures with Dante and their pals, as well as the conversations they’ve had in and around the store.

“Because who’d wanna watch that?” Dante responds. “It’s my life, and I barely want to live it.”

Nonetheless, Dante agrees to produce the film — he’ll figure out how to finance it … somehow — with Silent Bob signing on as the director of photography. (Yes! Smith’s character will shoot the movie Smith actually shot years ago!)

“Clerks III” gets a boost from a couple of appearances by Rosario Dawson (“Zombieland: Double Tap”) — as Dante’s wife, Becky, a character introduced in “Clerks II” — and it features some blasts from the longer-ago past.

Some of this is mildly fun, such as a montage of folks auditioning for the characters based on Dante as Randal. There certainly are some recognizable faces in the mix.

Mostly, though, it’s the Dante-and-Randal show, the two bickering so much you wonder how this movie even can get made. That the movie is so reliant on the duo is problematic, as neither O’Halloran or Anderson’s acting skills exactly have been finely sharpened over the years.

“Clerks III” is so packed with callbacks that it’s amazing Smith actually earns a heartfelt moment shared by the two characters late in the affair. The scene is the best argument for someone who may not be a hardcore fan but who’s seen the first two “Clerks” to spend time with this one. (It is damning, however, that the movie’s best scene doesn’t feature Smith’s trademark dialogue but instead Pearl Jam ballad “Just Breathe,” which helps to carry the emotional load.)

At the end of the day, “Clerks III” is for the hardcore Smith fans, those still thrilled to hear Jay declare “snoochie boochies!” and for whom there may be no level too self-referential for Smith to reach.

(Remember how Dante wasn’t even supposed to BE at work that day? If somehow you don’t, you will.)

The faithful can wait eagerly for a 10th View Askewniverse film, a planned sequel to Smith’s 1995 film, “Mallrats,” presently titled “Twilight of the Mallrats.”

The rest of us may have had our fill.

Moonage Daydream movie review: it may be all about Bowie but this trip lacks zip