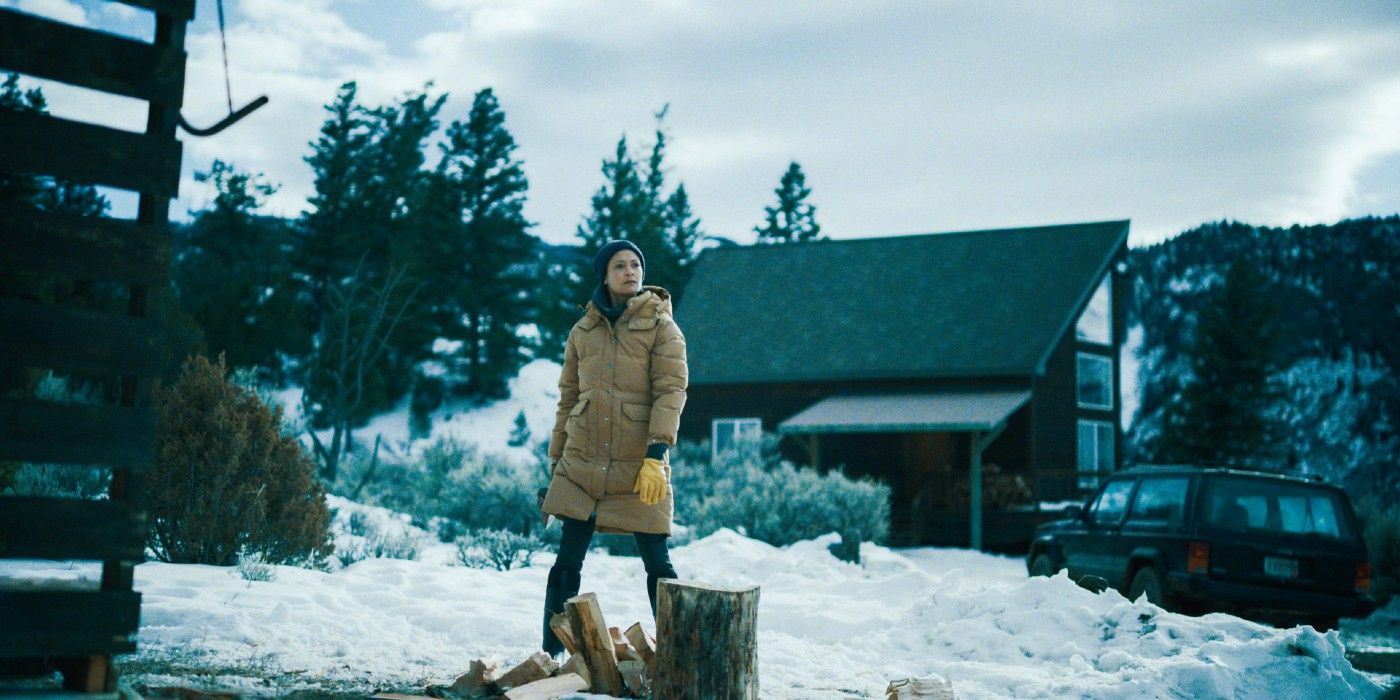 At first glance, the area where college professor Sandra Guidry (Thandiwe Newton) lives looks idyllic. She owns a beautiful house on a large plot of land in rural Montana, and she often sees wild deer on her morning runs. She’s surrounded by the forest and the mountains, immersed in the tranquil majesty of nature. Except that’s all a facade, as director and co-writer Julian Higgins explores in his tense slow-burn thriller God’s Country.

Sandra is seemingly the only person of color wherever she goes, whether that’s into town or to the local university where she teaches. She deals with condescension and dismissal from her colleagues and outright hostility from certain locals. That hostility keeps creeping closer and closer, and one day she arrives home to find a red pickup truck parked on her property. It belongs to a pair of hunters, brothers who live in town, and they just presume that they can intrude on her land without asking. She starts by being polite, leaving a note on their windshield, but that doesn’t stop them. There’s a dangerous confrontation building, but Higgins never takes the obvious or direct route to get there. There are elements of Westerns and revenge thrillers in God’s Country, but anyone looking for Newton to go all John Wick on these militia types will be disappointed.

Sandra is just as upset about the way she’s treated at work, especially by her department chair, Arthur (Kai Lennox), who also happens to be her neighbor. He scoffs at her concerns about the hunters, whose presence he embraces, and he ignores her suggestions about diversity during work meetings about the department’s plans to hire a new professor. The scenes of Sandra at work resemble another recent unconventional genre piece: the horror movie Master, starring Regina Hall as a similarly isolated professor of color at a staid university.

In Master, the school was the sole setting, but Higgins attempts to weave a range of social issues into God’s Country, and it’s not always effective. Sandra’s conflicts at work with Arthur and her conflicts at home with the hunters are all on a spectrum of racism and sexism, but there are times when Higgins seems to forget about one or the other for long stretches. Compared to an arrow being fired at her door and bloody bird carcasses being left on her property, Sandra’s arguments in conference rooms with colleagues seem much less urgent. That’s not to mention the late-film revelations about where Sandra grew up and what she used to do for a living, which bring in even more social issues.

Newton delivers those particular developments in a riveting monologue, and she carries God’s Country even when Higgins, working from a short story by James Lee Burke, loses focus. Sandra is confident and powerful, not hesitating to confront the hunters or to contradict Arthur, but she’s also constantly vulnerable, and Newton conveys those contradictions sensitively, often without saying a word. Sandra isn’t shy about calling the police when the standoff with the hunters escalates, and when skeptical sheriff’s deputy Gus Wolf (Jeremy Bobb) arrives for a perfunctory investigation, she’s prepared with details and physical evidence.

Gus is a bit exasperated at first, but he’s not just a stereotypical uncaring cop. He tells Sandra that he’s the only law enforcement officer in 300 square miles, and it’s clear that he has very little power. This is militia territory, and one of the hunters, Samuel (Yellowstone’s Jefferson White), has a whole armed crew backing him up when Gus attempts to talk to him at the Christmas tree lot where he works. Gus’ authority is nominal, and it would crumble under even the smallest test. The difference is that he still has a secure place in the town, while Sandra will always be an outsider.

Still, Sandra’s inclined to treat these men with courtesy and respect for as long as she can. God’s Country isn’t a movie about sadistic killers terrorizing a hapless woman. There’s a lovely scene of Sandra and Samuel’s brother, Nathan (Joris Jarsky), sitting in church together, quietly talking about how much they have in common, and lamenting the circumstances that have placed them both in impossible positions. It would have been a more obvious choice for Gus to be a lecherous and rude character, but he’s sympathetic to Sandra once he learns more about her, even if he can never truly understand what she’s going through.

Those quiet dramatic moments are more satisfying than the eventual violent showdown, which doesn’t come until God’s Country is nearly over. There’s suspense and a bit of action in the finale, but they’re still suffused with melancholy and regret. Higgins isn’t interested in offering catharsis either to Sandra or the audience. She can enact her revenge, but the systems that drove her to it will remain as monolithic and unchanging as the forbidding natural world around her.

Toronto film festival bounces back with Spielberg, Knives Out sequel and more