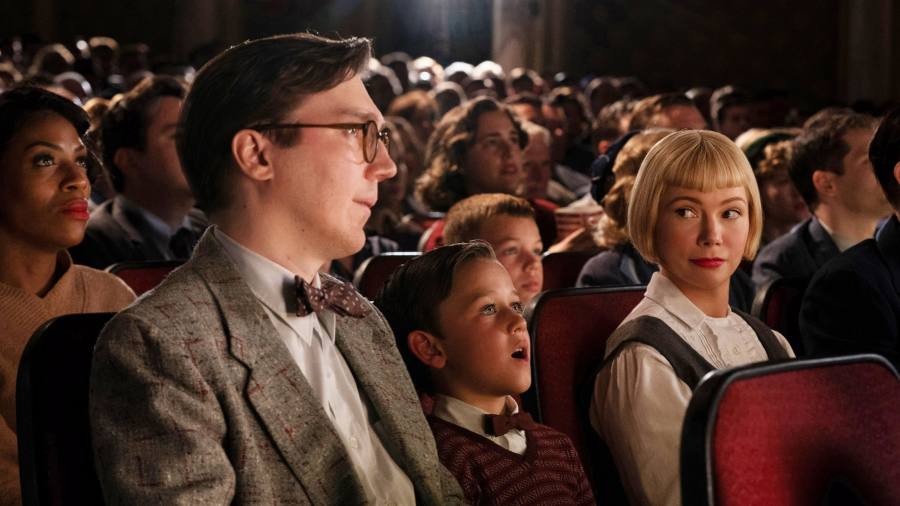 The Toronto International Film Festival (TIFF) has this year properly reassumed its role as a big-tent staging ground for movies of all shapes and sizes. The sprawling event spent a couple of years in the wilderness during the pandemic, but the 2022 edition has attracted crowds of fans, journalists and industry mavens to the city’s construction-constricted downtown. The jam-packed slate of features — upwards of 200 this year — meant that no one title could hold the spotlight for too long. While awards chatter dominates much press coverage, there are as many different TIFFs as there are attendees making their must-see checklists.

The festival did have one clear centrepiece, which was considered a programming coup before screenings even began. The Fabelmans is Steven Spielberg’s first film to have its world premiere in Toronto. On paper, the movie sounds like the most traditional of stories from the most familiar of American directors, chronicling how Sammy Fabelman — a stand-in for young Spielberg — nurtured a love of filmmaking growing up amid his loving parents’ teetering marriage. Yet The Fabelmans struck a recurring theme for this festival’s strongest offerings: movies that did something new with a genre you thought you knew inside and out.

In this case, it’s the postwar family saga, and specifically the kind that gets nostalgic showing how a baby boomer blazed their own path. But this isn’t just any boomer, it’s Spielberg, and so this is a story obsessed with movies and how they help us understand our outsized emotions of love, fear, wonder, sadness and so on. Sammy is captivated when his parents — computer engineer Burt (Paul Dano) and pianist-turned-homemaker Mitzi (Michelle Williams) — warily take him to see the 1952 hit The Greatest Show on Earth. He shoots his own version of the film’s train crash over and over with an 8mm camera, largely to process his intense feelings about what he watched. These home movies eventually grow in scale and imagination, and slowly we recognise the grand storyteller and orchestrator behind so many American classics.

Yet the tender heart of The Fabelmans is how Sammy’s parents and their changing relationship reverberate for him and his sisters. Both mother and father are unfailingly warm and kind, but Burt moving the family to Arizona for a big job opportunity ramps up tension with his free-spirited wife, who has bonded a little too closely with one of Burt’s employees, a family friend (Seth Rogen). Crucially, as all this plays out before Sammy’s eyes, rising actor Gabriel LaBelle gives a lived-in and intuitive performance as the boy, with body language that’s a mix of bustle and studied observation.

The screenplay is co-written by Spielberg and Tony Kushner — a partnership now on the level of Martin Scorsese and Paul Schrader — and grapples with the wild American energies of spirituality, masculinity and shame, while organically fleshing out the family’s Jewish identity. It’s a fascinating film that directs Spielberg’s high-beam narrative focus on to this boy’s life, where the revelations of growing up can feel stranger than fiction. 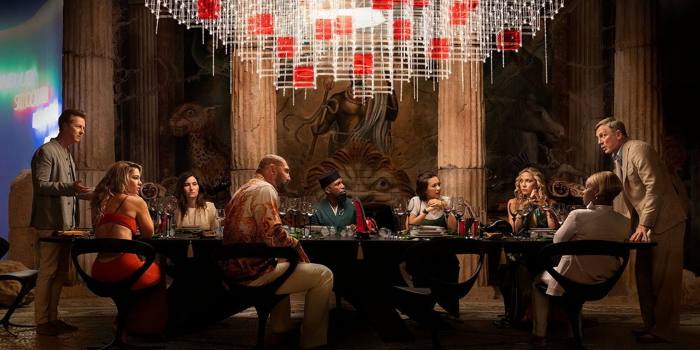 The premiere received the sort of applause usually reserved for a homecoming hero, and so did another film actually marking a kind of return. After Rian Johnson’s Knives Out premiered here in 2019, the writer-director’s Glass Onion: A Knives Out Mystery shared pride of place with Spielberg’s film on Saturday night. Their movies couldn’t be more different, but Johnson also has a showman’s confidence and infectious enthusiasm for the sheer fun of movies as bravura contraptions.

Daniel Craig reprises his role as Benoit Blanc, a self-effacing, Southern-accented genius of a private detective, and Johnson has a blast building out a luxuriant funhouse of a mystery, which unfolds on a billionaire’s private island early in the pandemic. Another colourful cast convenes, including Kate Hudson as an offensive fashionista, Dave Bautista as a gun-toting wannabe influencer and Kathryn Hahn as a slouchy politician.

Their tie is a longtime friendship with tech mogul Miles Bron (Edward Norton, smarming it up), who has invited everyone for a murder mystery of his own design. Also present is a former business partner, Cassandra (Janelle Monáe), a time-bomb of disgruntlement. But what sets this mystery apart is how Bron’s unimaginable wealth — he somehow has the “Mona Lisa” on the premises — becomes a queasier spectacle as the film goes on.

Instead of being a descendant of Agatha Christie’s rich eccentrics, Bron is the kind of best-of-everything cool that curdles into insufferable, and as the story twists and somersaults, we begin to pay more attention to the brute power dynamics in his circle of friends. It might be foolhardy to claim that Johnson has produced a socially conscious murder mystery, and yet — despite the guffaws that nearly drowned out dialogue at the screening I attended — there’s a sobering motif within the plot: namely, the moral compromises that proximity to great wealth tempts people with. 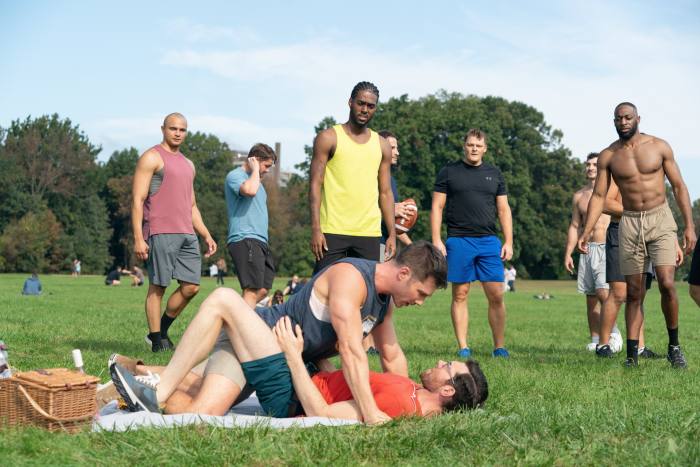 Rest assured, it’s entirely possible to watch Glass Onion without harshing your buzz, and likewise for Bros, a romcom that can actually get rather scathing. That’s not a huge surprise since it stars and is co-written by outspoken New York comic Billy Eichner, who broke through as a gonzo street interviewer. Eichner plays Bobby Lieber, a neurotic museum executive who falls for Aaron (Luke Macfarlane), a handsome lawyer who talks like the high-school hockey player he once was.

The movie’s first half-hour is a (successful) barrage of jokes, a charm offensive of sarcastic asides and self-deprecatory digs that also picks apart the gay dating scene and gay social life generally. It’s done with evident affection, but also with zero patience for the hypocrisy and hatred at large in the world, even as it pokes fun at the competing identity-driven interests at Bobby’s workplace, a yet-to-be-opened museum of gay history. Bros eases into the recognisable contours of the romcom (including a dicey dinner with Aaron’s parents and a serenade), but there’s a rawness and a vulnerability here so foreign to recent entries in the genre as to feel fresh. 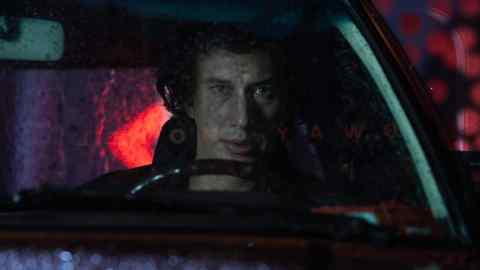 In Toronto, movies that originally premiered in Venice often get a new bounce. Some of the reprises that struck a chord included Martin McDonagh’s deceptively simple tale of broken friendship, The Banshees of Inisherin; Darren Aronofsky’s latest in-your-face gambit, The Whale, starring Brendan Fraser as a morbidly obese, housebound teacher; and Saint Omer, a stunning experimental drama from French director Alice Diop. These and other Venice titles might well stay top of mind as the season continues, which brings to mind another perennial attraction at the Toronto film festival: the actor showcase. One notable such turn might catch attention for being so low-key: Jennifer Lawrence in Causeway, playing an Afghanistan war veteran recovering from a neurological war injury that once upon a time might have been called shell shock.

Lawrence’s becalmed turn (opposite a very fine Brian Tyree Henry as a new pal) recalls her disciplined breakthrough role in Winter’s Bone, as she conveys pain here through an absence of expression rather than a mask of anguish. It’s a performance that may not always land, but her attempt underlines the importance of an actor taking a risk. That goes, too, for the filmmakers and actors at Toronto this year who took us to seemingly familiar places only to uncover new worlds of feeling.